This post may contain affiliate links or sponsored content. That means if you click on my link and buy something, I will earn a small commission from the advertiser at no additional cost to you. For more information on this, please click here.

Fried Italian Sweet Peppers are the perfect, delicious accompaniment to so many things–Italian sausage, scrambled eggs, bruschetta, pasta, or, quite honestly, any fork headed directly to my mouth. Seriously, though, it is not summer without them. If you see them at the market, buy them, fry them, enjoy them, repeat. Their beautiful colors are just the beginning!

I grew up eating Fried Italian Sweet Peppers and have so many special memories of my mom frying a big batch of them at the stove. During the summer, you could often find a bowl of them on the table adorned with nothing more than salt and a few basil leaves, Sometimes, they were seeded and sliced before frying. But, more often than not, my mom fried them whole and we were left to deseed them or not at the table ourselves.

I was lucky to grow up in New Jersey where we had access to lots of different varieties of these peppers throughout the mid-late summer. They came in all colors; some were thicker than others; some were super-hot and others were sweet, like the ones I made here. They were always just referred to as “Italian frying peppers”, “Italian sweet peppers”, or “long sweet peppers”, plain and simple. These were my favorite! Their sweetness meant you could eat as many of them as you wanted, without having to worry about burning your mouth for hours upon end. Plus, their mild flavor are a bit easier to digest than regular bell peppers!

We added them to eggs for classic Italian-American peppers and eggs, put them on our sandwiches (or made them the main ingredient in the sandwich itself), ate them with crusty bread, dipping the bread into the residual oil at the bottom of the bowl, or just simply as is by holding the pepper by its stem. Seriously–they are the best and bring back so many memories! Ask any east coast Italian American and they will know these peppers very well.

So Easy To Make!

This recipe is easy, and only requires a large, deep pan or Dutch oven, oil and salt (ideally, coarse sea salt). As the peppers used for this recipe are generally thin and long, the easiest way to handle them is to just pan-fry them whole. But, they can absolutely be stemmed, sliced and seeded before frying if you have the time and are so inclined. Choose the red, orange or yellow varieties of the peppers if possible, as they are sweeter and more flavorful than the green variety, in my humble opinion. (Typically, the green peppers will eventually turn red if allowed to ripen on the vine.)

Pan-frying is a dry heat method of cooking that relies on oil or fat as the heat transfer medium. The oil creates a little steam which helps cook the immersed part of the pepper, while the exposed topside allows any steam to escape. In practice, pan-frying is cooking technique that uses more fat or oil than sautéing and less than deep-frying (in which the product is fully immersed). The food also cooks at a lower temperature than both sautéing and deep-frying. As a guideline, about 25% of the food being pan-fried is generally immersed in the oil or fat.

To make Fried Italian Sweet Peppers, we will be using the following ingredients:

A complete and detailed list of ingredients with amounts and instructions is included in the recipe below.⁠

Here are the main steps for how to make these Fried Italian Sweet Peppers:

A couple of different variations on this basic Fried Italian Sweet Peppers recipe include:

My all-time favorite way to eat these Sweet Italian Fried Peppers is by holding their stem and placing them directly into my mouth while they are still warm! Having said this, here are a few other great ways to enjoy them:

To make this Fried Italian Sweet Peppers recipe, you will need the following: 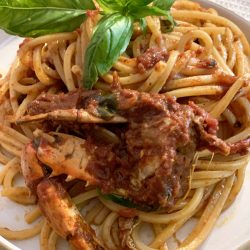 I hope that you are enjoying my Italian food blog Mangia With Michele and all of my Italian recipes and Italian-American recipes!

If you’ve tried this recipe or any other recipe on the blog, please let me know how it went in the comments below — I love hearing from you! Michele
Fried Italian Sweet Peppers are the perfect, delicious accompaniment to so many things–Italian sausage, scrambled eggs, bruschetta, pasta, or, quite honestly, any fork headed for my mouth. Seriously, though, it is not summer without them. If you see them at the market, buy them, fry them, enjoy them, repeat!
5 from 1 vote
Print Recipe Pin Recipe
Prep Time 5 mins
Cook Time 30 mins
Total Time 35 mins
Course Side Dish
Cuisine Italian
Servings 8 servings

This site uses Akismet to reduce spam. Learn how your comment data is processed. 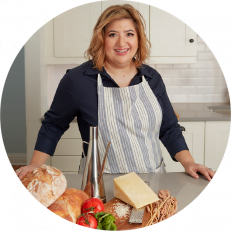 Ciao! I’m Michele Di Pietro and there is nothing I love more than feeding people, creating recipes and cooking for others. Welcome to my blog! My goal is to provide you with lots of innovation, inspiration and nostalgia through my Italian and Italian-American-inspired recipes and stories from my kitchen to yours. Let’s get cooking! read more
visit my amazon shop my favorite olive oil my favorite dutch oven